A pandemic political deal and feuding Democrats have made for a noisy start to the makeover of Oregon’s congressional maps in time for the 2022 election.

What was supposed to be a solo slam dunk has turned into a three-way high speed slam dance.

“Like shooting yourself in the head,” said U.S. Rep. Kurt Schrader, D-Salem.

Their bitter reproach was aimed at Oregon House Speaker Tina Kotek, D-Portland, who had struck a deal to end a slowdown during the 2021 legislative session by giving Republicans a seat on the House Redistricting Committee. It would be an even 3-3 split between parties.

Kotek argued Oregon needed the deal to pass major bills on housing, unemployment, health, and other issues. Besides, Democrats have argued in the past that political parity was good government.

National Democrats called it the latest in a string of state Democrats “unilaterally disarming” their political advantage on redistricting in the shrinking number of states where Republicans didn’t control the Legislatures and governorship.

“In rabid partisan states that are controlled by Republicans, they’re carving up left and right,” said Rep. Gerry Connolly, D-Virginia.

Will history stick to script?

Oregon was supposed to be a bright spot in 2022 — a Democratic-controlled state that was getting a sixth congressional seat.

Democrats need all the help they can get. Since World War II, the party of a new president — Republican or Democrat — averages a loss of 26 seats in the first midterm election. The Senate is harder to forecast because of staggered six-year terms. But the president’s party typically loses two Senate seats.

If history sticks to the script, Republicans will wake up the morning after the Nov. 8, 2022, election in control of the House and Senate.

The national political map will have to play itself out. 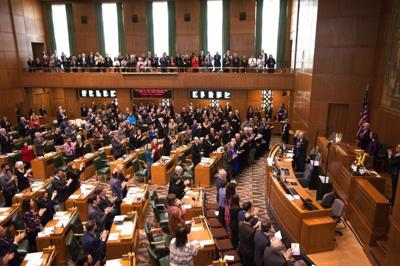 The big question in Oregon was when the Legislature would get the block-by-block data needed to create balanced legislative and congressional districts.

On Thursday, the U.S. Census announced the Aug. 15 date for sending packets to the states was on track.

“Right now, they say they will,” said Sen. Tim Knopp, R-Bend, the vice-chair and top Republican on the Senate Redistricting Committee.

It wasn’t supposed to work out this way. Democrats had big majorities in both chambers of the Legislature and fellow Democrat, Gov. Kate Brown, to give her stamp of approval.

There would be none of the partisan tussle of the redistricting for the 2002 election or the forced smile compromise of the 2012 districts drawn by a power-split Legislature.

Democrats would make the maps and approve the maps. Republicans could make noise, but not much else.

Then came the COVID-19 pandemic and like every other part of life, redistricting plans teetered and fell.

The census count would have fits of stop-and-start. Dates for getting data to the Oregon Legislature were pushed back again and again. Constitutional deadlines were missed. The Oregon Supreme Court had to step in.

It ordered a timeline do-over. But at politically hypersonic speed.

The House and Senate redistricting committees would receive the data in mid-August. But meeting outside of a legislative session, the “interim” committee could talk and plan.

They had a starting point: round numbers. The new official population of Oregon was 4,237,256.

The tougher task would be Congress. With six districts, each would have 706,209 people.

The raw census data gave some hints on where things might bulge and shrink. The Bend area and suburban Portland showed high rates of growth over the past 10 years. That would mean more and geographically tighter districts.

Conversely, the slower-growing or stalled population changes in far eastern and southwestern Oregon would likely lead to fewer and geographically bigger districts.

But exactly where and how the changes will be mapped won’t be done until next month.

During a “roadshow” of hearings in early September, the House and Senate lawmakers hope to give residents an inkling of the future political topography.

“The goal is to have at least one option for legislative and Congressional districts” to show the public, Knopp said.

How any differences will be worked out is also blurry. How the House and Senate panels will work together is unknown. Kotek’s deal gave the House panel parity. But the Senate made no deal and has Democrats with a 3-2 majority.

It’s all speculative until a special session is called for Sept. 20. A proposal could be officially submitted for approval by the House and the Senate, then sent to Brown.

All in just one week.

The anger displayed by DeFazio and Schrader, the two Democrats who criticized Kotek, was largely due to a possible nightmare scenario for the duo.

If the unbalanced pair of panels couldn’t come up with a plan or if Brown rejected it, the fallback would split the fate of redistricting in two.

Secretary of State Shemia Fagan, who gave Democrats the state’s official job of election referee after four years under Republicans, would handle the legislative maps.

As a former Democratic state senator from Portland, Fagan is no neophyte on the political ramifications of the new districts.

But the congressional maps would go to a special five-judge panel who not only would have to rejigger the five existing congressional districts but shoehorn in a sixth one the state was awarded on the basis of its growth.

That could submarine DeFazio and Schrader’s implicit desire to have their increasingly competitive districts given a larger chunk of Democratic votes to make re-election safer.

In terms that echoed frequent Republican criticism of Kotek’s focus on Democrats’ metropolitan stronghold, DeFazio told Politico that it was symptomatic of the speaker’s disregard for Democrats south of the Interstate 5/Interstate 205 interchange.

“She is totally Portland-centric, and nothing outside of Multnomah County exists so far as she’s concerned,” DeFazio told Politico.

The first and third congressional districts in and around Portland easily return incumbent Democrats to office every two years. Republicans have been ceded the vast area of the second congressional district that includes everything east of the Cascades and a slice of the southwest stretching into Medford and Ashland.

While both DeFazio and Schrader won re-election in 2020, the implicit hope is that in redrawing the districts, the Legislature would slide more Democrats their way, while keeping CD2 a Republican bulwark and the new district the one where a neophyte would have to deal with perhaps a more competitive electorate.

If the Legislature fumbles and the five-judge panel gets involved, the panel could cook up maps akin to a mystery meat pot luck — anybody’s guess what is inside the lines.

But a picture of the current districts simply being stretched and curved a bit for the sixth is simplistic, some involved in the redistricting say.

Katherine Morrison, legislative director for Sen. Kathleen Taylor, chair of the Senate Redistricting Committee, said the location of the new district isn’t a matter of taking the current map and shoehorning it between a couple of existing districts. The data will show demographic and well as geographic shifts.

The puzzle includes how the six puzzle pieces will be shaped.

“All of the five current districts will need to change as well,” Morrison said. “So, the question may more accurately be posed as to how will Oregon’s six congressional districts look?”

The future will start to come into view in the next two months.