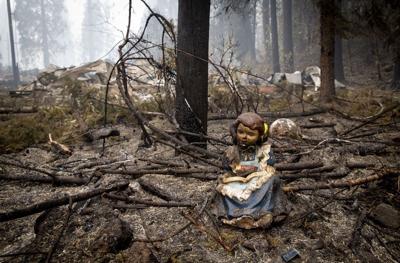 A $195 million wildfire bill passed out of the Ways and Means committee Tuesday (June 22, 2021) on a party-line vote and now heads to floor votes in the House and Senate amid criticism by some lawmakers that it will hurt rural Oregonians.

Backers of Senate Bill 762 are calling it one of the most important pieces of legislation being considered this session as the state seeks to ramp up its fire suppression, prevention and community preparedness in the face of longer and more severe wildfire seasons.

They expressed willingness to consider a last-minute amendment if it would bring bipartisan support for the bill and guarantee its passage. But it was unclear whether there is time for that process to play out before the session’s end — expected Friday or Saturday — and the committee moved the existing version in a 14 to 9 vote.

The legislation is something of a Swiss Army knife, a multipronged approach proposed by the Wildfire Response Council empaneled by the governor to develop a holistic model for wildfire prevention, preparedness and response. The council delivered a report in November 2019 with 37 recommendations .

Among other things, SB 762 directs utilities to develop wildfire mitigation plans, which must be approved by state regulators. It provides money to bolster state firefighting capacity; establishes programs for clean air shelters and smoke filtration systems; adopts fire resistant building codes; requires property owners in high-risk zones to establish buffers around their homes and structures; creates a permanent wildfire advisory council and a state wildfire programs director, funds a youth corps to work on community preparedness; and makes a down payment on the vast backlog of forest restoration work that many believe will be critical to restoring forest health and reducing wildfire severity.

On Monday, the bill took a rhetorical beating from a small group of lawmakers in the Capital Construction Subcommittee of Ways and Means, and the full committee heard the same message Tuesday. Among the criticism: the bill is overly prescriptive; it was developed without enough input from the public; it puts so much money into the troubled state Department of Forestry; and that too many important details and definitions are being left to agencies to hash out in subsequent rulemaking processes.

The sharpest feedback centers on the bill’s provisions requiring the Oregon State Fire Marshal to establish enforceable requirements for property owners to manage combustible vegetation around homes and other structures in areas where wildfire risk is classified as high and extreme.

Underlying that debate is how the bill defines the so-called wildland urban interface — the area where most of those restrictions would apply and property owners would bear the potential cost and aesthetic impacts.

A number of Republican lawmakers as well as Sen. Betsy Johnson, D-Scappoose, expressed concerns about how those rules would apply to ranchers, wheat farmers and rural property owners, and whether it would require their constituents to denude their properties and bulldoze crops to comply. Others questioned whether wildfire risk designations at the property level would affect insurance costs or property values.

Senate Republican Leader Fred Girod, R-Stayton, reiterated many of the criticisms he offered in Monday’s hearing when he said he would “probably rate this as the worst bill of the session” and suggested that most of the support is coming from lawmakers from urban centers. He said that fire resistant building codes could add $50,000 to $100,000 to the price of a home.

“This is a terrible bill, and I really resent the fact that we’re passing it in the midst of all these people trying to rebuild,” said Girod, who lost his own home in last year’s Santiam Canyon fires.

Fire science experts and firefighters say that a statewide, mandatory approach to defensible space and building codes are critical and cost-effective elements of a unified plan. Roger Johnson, chief of the Sisters Camp Sherman Fire District, said more people are building homes in high risk areas, and that a voluntary program won’t work.

Rep. Pam Marsh, D-Southern Jackson County, said in an interview Tuesday that the costs Girod cited are wildly out of step with those estimated when the state’s Building Codes Division was developing wildfire mitigation code standards in 2018.

At the time, the Building Codes Division estimated the provisions in the code would add approximately $2,500 to $3,000 to the existing cost of a typical 1,200 -square -foot, single -family home.

Marsh said there are a variety of exceptional costs that come with building in those environments, including wells and septic fields, and when wildfire arrives, homeowners would be happy they’d spent the money.

Likewise, Sen. Jeff Golden, D-Ashland, told Ways and Means members Tuesday that the dystopian vision of rural Oregonians being required to clear-cut old trees on their properties, rip out ornamental vegetation and raze crops was not going to happen.

Golden said that extensive public input in the rulemaking process had been purposefully built into the bill. It also includes an appeals process for property owners if their property is designated as high or extreme risk for wildfire .

That was a mantra for Democratic lawmakers in support of the bill. They acknowledged that it may not be perfect, but that public accountability was built in and would be extensive as rules are drafted.

Republican members urged sponsors to consider a last-minute amendment drafted by Rep. Mark Owens, R-Crane, that addresses the definition of the wildland urban interface. They said adopting it might attract bipartisan support when the bill reaches the floor of the Senate and the House. Johnson said she supported that effort, but it would probably take expedited action by one of the Legislature’s presiding officers to make that happen.

Wil and a firefighter for Tualatin Valley Fire & Rescue, said she was disappointed that the bill, the product of extensive negotiations and input from many stakeholder groups over a two-year period, had become so partisan in the last few weeks.

“Campaign season is coming up and nothing plays better than the urban -rural divide,” she said. “As a firefighter, what I need is for people to come together on this. This is personal to me, it’s not just politics. … If we don’t start somewhere we’re going to be doomed to repeat this cycle. Not to be alarmist, but the building is on fire.

Posted at The Bulletin by Ted Sickinger on 6-23-21