SALEM, Ore. — 2022 brings a fresh start for us all, and it also means a lot of bills passed in Oregon during the 2021 session go into effect. 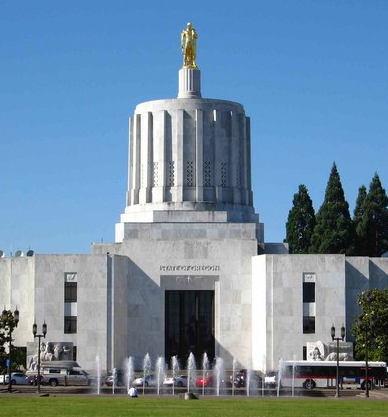 On police reform, Senate Bill 621 gives Portland the go-ahead to create its new citizen-led police oversight board. Previously, state labor law was unclear on if the city and police union needed to negotiate moving to a citizen-led oversight board from the current system. The legislation allows other cities to do the same if voters approve the change.

House Bill 2936 expands and improves background checks for applicants to law enforcement agencies. It makes them uniform across the state and also allows agencies to set policies for, and monitor what’s on, an employee’s personal social media accounts. The goal is to weed out applicants who may be racist or who have ties to extremist groups.

Here’s one related to transparency: House Bill 3145 requires law enforcement agencies to report discipline to the state that involves economic sanctions within 10 days, like a suspension without pay. That information will also be added to a public database with the state agency that certifies law enforcement officers. Right now, the database only includes info for officers who have their certification suspended or revoked. The discipline information must be forwarded once the discipline decision is through the arbitration process.

Senate Bill 850 requires counties to track the deaths of homeless people, similar to what Multnomah County is already doing. It will make it easier for the state to keep track of how many homeless people pass away.

A couple of pieces of legislation address discrimination and intimidation. First, House Bill 2935 adds natural hairstyles, like braids, to anti-discrimination legislation for schools and employers. It also allows student-athletes to wear religious clothing during sports. Senate Bill 398 makes it a crime to intimidate someone by displaying a noose. It will now be a misdemeanor in Oregon.

House Bill 2648 went into effect earlier this year, but it’s worth highlighting. People 18 and older can buy cold medicine, like Sudafed, from a pharmacist without a prescription. Oregon was one of two states that required a prescription. Now, the pharmacist just puts the purchase info into a national database.

Do you like public meetings on zoom? House Bill 2560 requires that public bodies make their meetings open for people by phone, video, or another electronic or virtual method, much like during the pandemic. It also requires public bodies take testimony electronically if it’s allowed in-person.

Big changes are coming to counting ballots. House Bill 3291 forces counties to include ballots that are received up to seven calendar days after the election if they’re mailed by election day and postmarked.

Counties also must count ballots that come within seven days if the postal indicator is gone or not legible. Previously, state law required counties to include ballots received by election day.

Senate Bill 3273 limits when mugshots can be released to the public. Police can only release them if there is a law enforcement need, like catching a wanted person, or if the person has been convicted for the crime that resulted in the mugshot being taken. The photos can still be released to victims.