Hundreds of emergency shelter beds for people experiencing homelessness could pop up across Oregon in the next year if the State Legislature approves a bill to remove cumbersome zoning rules and demand that cities approve new facility proposals. 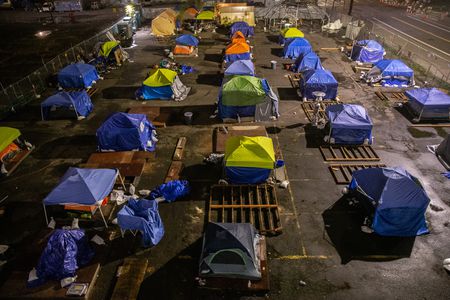 House Bill 2006 would remove a tangle of land-use approvals and paperwork typically needed to open a shelter, which advocates say currently slow the process or prevent it altogether. The bill would demand cities allow shelters to open as long as they meet minimum, basic requirements.

“There just is not enough shelter space … to serve all of those in need,” said House Speaker Tina Kotek, a Portland Democrat who sponsored the bill. “Communities need this tool … Local government has been at the table to help put this bill together and we need to get it to them as quickly as possible.”

The House Committee on Housing held the first public hearing on the bill, and all who testified spoke in support of it.

In Portland, home to the state’s largest number of unhoused individuals, homelessness prevention leaders have said that the high cost of operating shelters and other alternatives like tiny house pods, not roadblocks to siting them, is the primary reason the city has too few indoor sleeping spaces.

Supporters of the bill hope it gains rapid approval in the House and Senate. That’s because Kotek and other leaders plan to pair it with $45 million in funding to be distributed across the state to help create more low-barrier shelter beds and navigation centers to complement them. The centers would provide services to help people transition into long-term housing and other supports like access to mental health services.

The funding that Kotek is asking for would need to be approved in a separate bill, House Bill 2004, which also would have to go through the Joint Committee on Ways & Means, a step that normally doesn’t occur until late in a legislative session.

The companion bills would require that the shelters and navigation centers be operating by July 1, 2022, when the provisions lifting normal land use and zoning rules would sunset.

With so much support for the bill, some jurisdictions are already making plans to hit the ground running if the measure is enacted.

To ensure that no Oregonian sleeps outside without a roof over their head at night, 5,800 additional shelter beds would need to be created across the state, said Andrea Bell, Oregon Housing and Community Services housing stabilization director.

Currently, there are roughly 6,800 such beds in Oregon, including some that pop up only during the winter months, according to a statewide shelter study conducted two years ago. Bell said since the pandemic began, that number has shrunk due to social distancing guidelines requiring more space between beds.

Between 2015 and 2019, the number of unsheltered people increased 37%, according to the shelter study. Officials who spoke during the hearing said that the number has likely increased since then and will continue to increase in coming years as a result of the pandemic’s economic impact.

“We have to continue to keep investments and urgency and pressure on the need for infrastructure,” Bell said.

The recent severe winter storms across the state highlighted the need.

Rep. Jason Kropf, D-Bend, said one individual in his district died from cold weather-related impacts while on a waitlist to get into a shelter.

“It takes time to site homeless shelters and that is causing issues in our areas of the state where we experience cold weather worse than other areas,” said Rep. Jack Zika, R-Redmond. “We tragically have death every year because of the cold.”

Many city officials and representatives spoke of the challenge of finding land or a building where shelter could be created, often times causing temporary shelters to shuffle from one location to the next year to year. The shelter coalition in Bend spends an entire year locating and getting approvals for a shelter just for winter use, said Gwenn Wysling, who runs a shelter in the area.

In Redmond, an outdoor tent shelter was planned to be set up on private property recently but was ultimately denied due to land use rules, Zika said – a frustration that he hopes this bill addresses.

he funding slated to be attached to the measure is paramount to the success of its implementation, officials said. In Salem, where the city has committed to providing a plethora of homelessness resources, there still has been a struggle to create a shelter and navigation center due to lack of infrastructure funds.

“A 24/7 program with services is key to saving lives,” said Chris Hoy, Salem City Council president. “It will be a vehicle to help people get into a rental assistance program … or a permanent supportive housing program.”

While the League of Oregon Cities supports the bill, its lobbyist reminded the committee that it is not the end-all answer.

“While shelter is not a permanent solution, we need more shelters to provide a safe place to sleep while we continue to do the work to provide more affordable homes,” said lobbyist Ariel Nelson.

HOW THE MEASURE WOULD WORK

Under the measure, emergency shelter could be a building or a cluster of smaller structures, such as a tiny home village, that provides shelter on a temporary basis.

While the measure would require the lifting of some rules such as design, planning and zoning regulations, the shelters would still have to meet certain guidelines. The shelters must have sleeping and restroom facilities, comply with building codes, and if they are in a natural disaster zone, comply with regulations that keep people safe if a disaster were to occur.

Additionally, the shelter must have adequate transportation for people to reach it and services they will need, such as being located near transit or offering transportation services.

An approved shelter must either be operated by a local government or by an organization that has at least two years’ experience operating an emergency shelter already.

If a shelter opts to provide showering, storage, laundry, food or case management services, it must do so at no cost to clients.

While the rules for approving shelters would apply statewide, not every jurisdiction or organization would receive funds. The grants are slated to be distributed via a competitive process that prioritizes funding based on need throughout the state.

The measure would complement work that the city of Portland is already doing, said Eric Engstrom, principal planner for Oregon’s largest city. While the bill would remove barriers temporarily, the city is working to create similar solutions to address long-term needs.

Portland’s proposed shelter-to-housing continuum would similarly address zoning barriers that make it challenging to erect various types of shelters in the city. The City Council is expected to hold a public hearing in mid- or late March regarding the permanent rule changes, which are essentially an extension of a temporary provision it enacted temporarily during the pandemic.