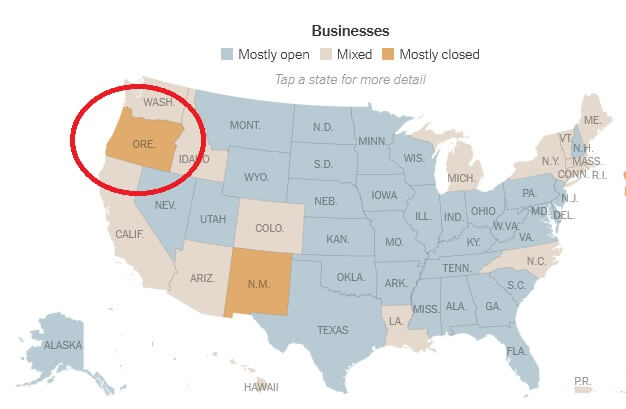 In a surprise move, California Governor, Gavin Newsom, has begun re-opening California after a re-call effort has nearly gained enough signatures to qualify for the ballot.

Governor Newsom says it is about the data but he is hiding the data:

“State officials said the decision to lift the stay-at-home order came amid improving trends in California’s rate of infections, hospitalizations, and intensive care unit capacity as well as vaccinations. But Newsom’s administration has not made the data public. Health officials have said making it public would confuse and potentially mislead the public. Harmeet Dhillon, CEO and founder of the Center for American Liberty, told Fox Business her legal team has made multiple attempts to request the data through Public Records Act requests but Newsom’s administration has refused “to reveal the data upon which they’re basing these draconian restrictions.”

At the same time, Oregon is among the final two states to be mostly closed in a lockdown according to the New York Times tracker.

The final two states are Oregon and New Mexico.  Both states made national news last fall for being the few to criminalize Thanksgiving with high penalties and the most restrictive limitations.