Many of the illegal marijuana grows in Klamath County have been linked to national and international criminal organizations, and the breadth of the problem has overwhelmed local law enforcement and justice systems and has begun to deplete county resources.

Two major marijuana busts in Klamath County just this month led to the seizure of more than $140 million worth of product on the illegal market. One bust was at a potato shed south of town while this week’s find was a warehouse in the middle of downtown Klamath Falls.

On Wednesday, Oct. 20 — a day after the warehouse bust — the Klamath County Sheriff’s Office pulled over three U-Haul trucks on Highway 66 near Keno. The trucks contained more than 17,600 pounds of mostly processed marijuana buds with an estimated street value of more than $20 million.

Sergeant Cliff Barden, of the Oregon Department of State Police Basin Interagency Narcotics Enforcement Team (BINET) said illegal grows in Klamath County are clearly linked to drug cartels. He said the cartel’s strategy in the area is to overwhelm local agencies and resources with the sheer volume of production, ensuring that much of the operation will go unnoticed and ultimate generating immense profits.

“They are intentionally trying to overwhelm the system,” Barden said. “And that is why it is so difficult.”

Barden said BINET has been able to link many of the grows in the county to mid-level operations in California, which then are directly linked to drug cartels in Mexico. The California connections are several levels removed from the main operation, but are coordinated out of Mexico, Barden said.

Barden said while there are some smaller non-cartel affiliated groups of “entrepreneurs trying to jump on board and join the green gold rush,” the vast majority of the illegal grows are coordinated by regional administrators in California linked to the cartels. 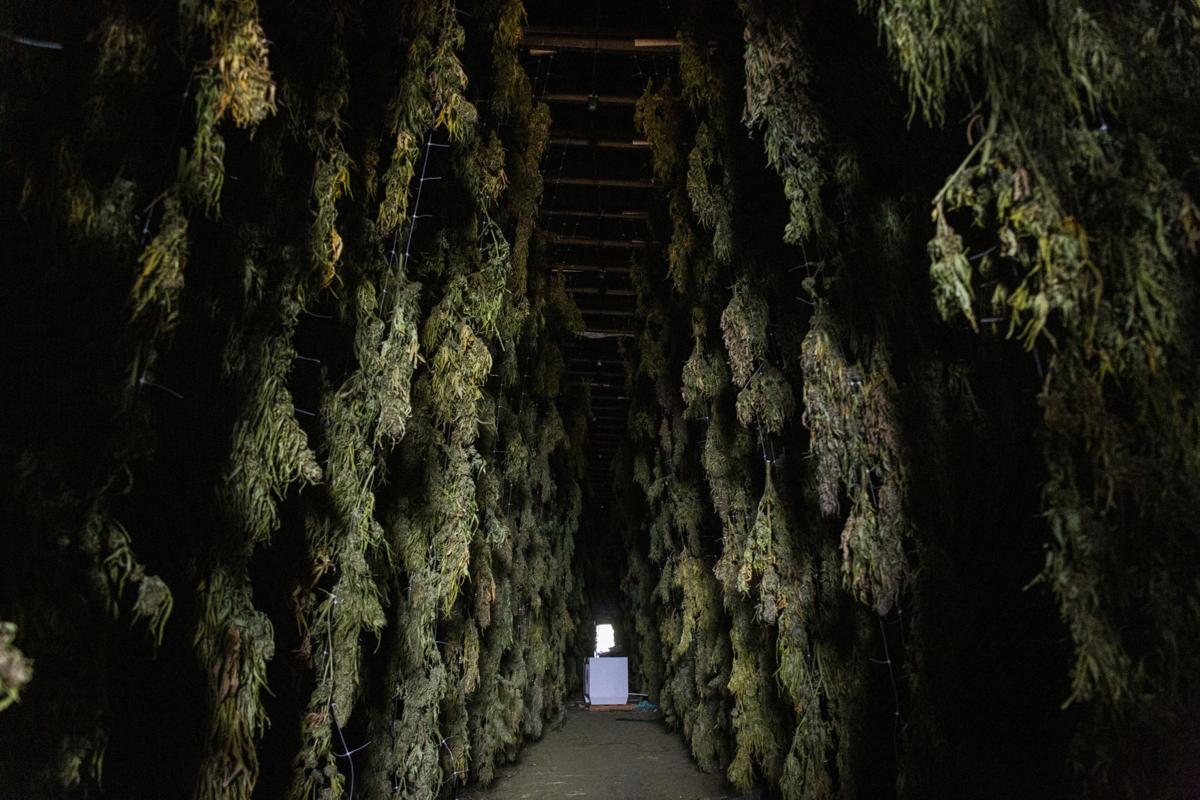 Thousands of marijuana plants hand from the ceiling of a former potato shed turned marijuana drying and processing facility on Oct 7, 2021

“If they are smaller grows — one to two greenhouses or less — that could be anything, generally just some little crew trying to make some money,” Barden said. “Almost all of the large grows — with dozens and dozens of greenhouses or even more, especially this year — have all been the exact same type of operations that are all coordinated from out of state, run by some mid-level person connected to Mexico.”

Eve Costello, the Klamath County District Attorney, said her office will absolutely be charging certain individuals involved in illegal marijuana operations. One potential charge could include money laundering, she said.

”We will be seeking the max penalty on the people we catch,” Costello said. “Our focus is to ensure (illegal growers) understand we don’t want them here.”

Costello likened the situation to the “Wild Wild West” and said her office, along with local law enforcement, is taking the situation very seriously. She also hopes Klamath County residents will do their part to alert law enforcement to illegal grows as soon as they pop up.

”If you smell something, say something,” Costello said. “Let us know as soon as the sheds go up, so we can start our investigation now, not later. People don’t realize law enforcement can do something about it.”

Barden said BINET’s short term goal is to reverse the recent trend of lax enforcement on the illegal marijuana front, eventually creating a deterrent to some of these organizations.

“Our short term goal here, locally, is basically to show the organized crime operations that Klamath County is not a place they will be left alone or be safe, and that we will work aggressively to enforce the laws we have so they have a harder time making a profit here,” Barden said. “After this year, with just a little show of enforcement, we’ll hopefully, gradually get better and better. That’s what I’m hoping for. Before this year there really wasn’t much marijuana enforcement at all for quite a few years, and it kind of exploded because of that.”

The prevalence of massive illegal marijuana operations in Klamath County is starting to mirror the issues seen in neighboring Jackson County, which declared a state of emergency Oct. 13 to help deal with the problem.

Jackson County Commissioner Rick Dyer said the county’s emergency declaration will garner resources from the state. Dyer said Jackson County is seeking at least 18 county patrol deputies as well as an increase in support staff, materials, and supplies. Dyer is also asking to triple the county’s code enforcement staff, and for three more staff members to be added to the Jackson County watermaster’s office.

“What we used to process in three weeks is taking four months,” Dyer said of code enforcement claims. “And the watermaster has seen a 700% increase in marijuana related water theft and other water offenses. They haven’t been able to respond to half of them because they are so understaffed.”

Dyer said the illegal marijuana situation in Jackson, as well as in neighboring Josephine County, has produced a number of negative impacts for the region. Some of the issues, Dyer said, include human trafficking, narco slavery and forced labor amid deplorable living conditions. Drug traffickers intimidate and abuse workers, some of whom are parents to young children, or are minors themselves.

“This is cartel activity,” Dyer said. “A human rights crisis is what we are seeing going on at these grows.”

The increase in illegal grows, which require immense amounts of water, is particularly difficult during the prolonged drought in the region.

Dyer estimates it could take around $10 million per biennium to fight back against illegal grows, and to adequately staff local agencies to create a deterrence to future illegal activity.

“It is a multifaceted issue and that is why we felt it was warranted an emergency be declared,” Dyer said. “We need to address this now because the problem is not going away and its going to get worse.”

Dyer added he hopes Klamath and Josephine counties will jump on board and declare their own emergencies, which would create a stronger and more united front against the illegal marijuana growers.

Bentz called on Garland to direct more federal resources to local law enforcement in the area.

“I’ve spoken with the FBI, but the Justice Department needs to be doing more about this issue at all levels.” Bentz said. “Oregon, and possibly other states are caught up in the illegal growing and production of marijuana and cannabis on an industrial scale. According to local law enforcement, this industry is based in large part on the miserable suffering of thousands, if not tens of thousands, of people coming across the border illegally, and then being pressed into indentured servitude by cartels.”