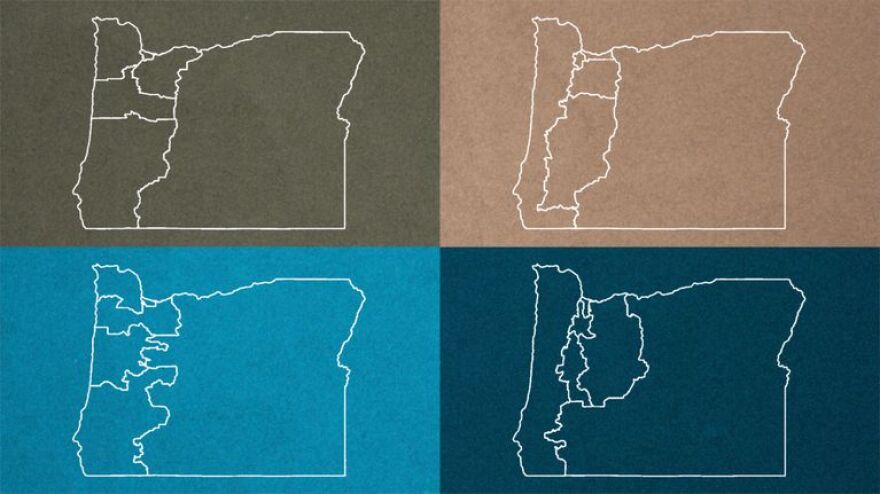 What should Oregon’s political districts look like for the next decade? That’s a question that state lawmakers will work to decide this month. Above are four potential plans for congressional districts submitted by members of the public. MacGregor Campbell/OPB

Oregon Democrats will press forward next week with a plan that would likely give their party dominance over the state’s congressional landscape, potentially dooming one facet of a special legislative session before it begins.

After 12 hearings featuring testimony from hundreds of Oregonians — a segment of whom criticized the Democratic plan as a “gerrymander” that does not reflect the state’s true voting patterns — the party opted not to meaningfully change its initial proposal for how to incorporate a sixth congressional district into the state.

Instead, the congressional map posted to a legislative website Thursday evening is likely to lead to the same result as one Democrats proposed initially: five seats winnable by Democrats, and one overwhelmingly favoring Republicans. That’s a plan one analysis tool suggests is biased.

Democrats leading the redistricting effort issued a statement Friday saying their maps meet statutory requirements “and the highest legal standards.” Under state law, a district cannot be drawn with the intention of favoring any one politician or political party. They also must be contiguous; use existing political boundaries, geographical features and transportation links; and not unduly separate “communities of interest,” an amorphous term that can have many meanings.

The majority party’s unwillingness to alter its vision for redrawing the state’s congressional districts was not unexpected. House Minority Leader Christine Drazan, R-Canby, told OPB earlier this week Democrats had refused to change their plan. She said members of the party told her they were being pressured by Democrats in Washington, D.C., to stick with the proposal, an allegation three legislative Democrats involved in redistricting talks said they had no knowledge of.

“I have no idea where that information or concept is coming from,” said state Sen. Kathleen Taylor, D-Portland, chair of the Senate Redistricting Committee. “I have not spoken to the delegation. Their offices have not contacted me. I don’t even know who those people are.”

“The references had been that they were just told that they couldn’t change those maps,” Drazan said.

Kotek said in a statement that the claim was “ridiculous and not true,” adding: “Apparently Leader Drazan will say anything to distract from her failure to successfully engage in this negotiation.” Courtney’s office did not respond to a request for comment.

With their insistence on the 5-1 map, Democrats appear to ensure the Legislature will not pass a new congressional plan next week, as it takes up the once-a-decade process of redistricting. Republicans have vowed to oppose the plan, and can block it from passing out of committee and to the House floor.

Less clear is whether the parties can find agreement on how to rejigger the state’s 90 legislative districts, 60 in the House and 30 in the Senate. After reams of testimony and negotiations between party leaders, Democrats driving the process did tweak maps first floated by Senate Democrats earlier this month.

According to PlanScore, a tool that analyzes redistricting plans for partisan bias, proposed maps for both the House and Senate are likely to give Democrats a safe majority in both chambers, though it’s not clear they would be guaranteed the three-fifths supermajorities they currently hold.

Along with that likely power balance, though, come boundary shifts that could pit incumbents against one another. For instance, state Reps. Maxine Dexter and Lisa Reynolds, both Democrats from Northwest Portland, would be lumped into the same district.

In other cases, incumbents in different parties would be placed into the same district, setting up a showdown only one could win. Reps. Daniel Bonham, R-The Dalles, and Anna Williams, D-Hood River, would reside in the same Democrat-leaning district under the plan. Senate President Peter Courtney and Sen. Kim Thatcher, R-Keizer, would be lumped into a highly competitive swing district.

PlanScore, affiliated with the nonpartisan Campaign Legal Center, uses five metrics for measuring bias to analyze maps. For both the House and Senate plans Democrats have proposed, the metrics are split, with some slightly favoring Democrats and others slightly favoring the GOP.

That might not be enough to secure a deal. In recent days, House Republicans have said they believe that the current legislative maps — which Democrats used as one basis for their proposal — were rigged.

“The current districts that we are living with are based upon partisan gerrymandering maps drawn to benefit the political party and the politicians in power at the expense of Oregonians,” state Rep. Shelly Boshart Davis, R-Albany, a co-chair of the House Redistricting Committee, said Sept. 3. She added: “Our current districts have diluted the voices of Oregonians for two decades to advance one political party.”

Republicans have made that allegation despite the fact that members of their party voted alongside Democrats to approve the maps in 2011. There was no subsequent legal challenge to that plan.

Drazan said Friday that the legislative maps released by Democrats currently had no path forward among her members. “It is a heavy-handed partisan map that is all about incumbency protection for a really strong, deep Democratic majority that they’re intent on holding for the next decade,” she said.

Drazan in particular took issue with the way Democrats treated parts of Eastern and Southern Oregon, including districts that would split the Klamath Falls region three ways, and a district that would link The Dalles to bluer areas in east Multnomah County.

House Republicans had submitted their own plans for crafting House, Senate and congressional districts that leaned far more heavily in the GOP favor. For instance, a proposal for new House districts could have resulted in a near-even split between the parties in the chamber. A congressional map Republicans have pushed might have produced three Republicans elected to U.S. Congress from Oregon, and three Democrats.

But the plans got scant interest from Democrats, who said they focused too heavily on rural areas.

“They started in rural areas where there was not population, we started where there was growth,” said state Rep. Andrea Salinas, D-Lake Oswego, a co-chair of the House Redistricting Committee. “Those were the fundamental differences between us.”

Whether a deal might emerge over the weekend was unclear Friday, though members of both parties held it out as a possibility.

“There’s a lot of conversations that need to happen between now and Monday, said Drazan. “Hope springs eternal that we can come to some agreement before then.”

“I’m hoping that now the [new] maps have been made public, they’ll be reviewed by the public and that folks will understand how fair and balanced they are,” she said. “So I think that they should pass, and I’m hoping that they find their way to the governor’s desk.”

Republicans’ political calculus will almost certainly be shaped by the alternative that lies in store if they do not agree to a plan by the Sept. 27 deadline. In that case, responsibility for drawing new legislative maps would fall to Secretary of State Shemia Fagan, a liberal Democrat who is unlikely to share the party’s view of how districts should be apportioned.

Fagan has taken steps to form a citizen commission, made up of Oregonians of all political persuasions, that will serve in an advisory capacity if she is handed the job. Even so, Republicans and Democrats alike say any maps coming out of the secretary’s office would likely favor the majority party.

If lawmakers reach their nearly-assured impasse over Democrats’ congressional proposal, the process is different. Responsibility for drawing a new U.S. House district will fall to a panel of five state judges, in a process that has never been tested. That judicial panel, featuring a jurist from all five current congressional districts, would be appointed by State Supreme Court Chief Justice Martha Walters, who was appointed to the court by Democratic Gov. Ted Kulongoski in 2006.

Posted at Jefferson Public Radio from OPB by Dirk VanderHart on 9-18-21. OPB reporter Sam Stites contributed to this story.