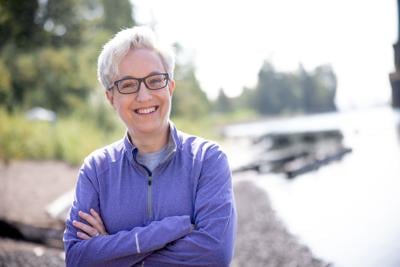 Oregon House Speaker Tina Kotek, seen in this photo from her campaign, announced Thursday that she is running for governor. Gov. Kate Brown cannot run for re-election in 2022 due to term limits. Kotek, a Portland Democrat, has led the state House since 2013. Campaign photo

PORTLAND — Tina Kotek, the Speaker of the Oregon House, announced Thursday (Aug 26, ’21) she is running for governor.

Gov. Kate Brown, a Democrat like Kotek, cannot run for re-election in 2022 due to term limits. Kotek, a Portland lawmaker, has led the state House since 2013.

“Oregonians are living through a devastating pandemic, the intensifying impacts of climate change, and the economic disruptions that leave too many behind,” Kotek said in a statement. “We must get past the politics of division and focus on making real, meaningful progress for families across our state.”

She said as governor she would focus on issues like affordable housing, access to health care, racial and economic justice and climate matters.

Kotek is so far the highest profile candidate in what is likely to be a crowded Democratic primary field. In Oregon Democrats have overwhelming majorities in the Legislature and the party has held the governor’s office since 1987.

Oregon Public Broadcasting reports state Treasurer Tobias Read is widely expected to announce a campaign in coming days, Attorney General Ellen Rosenblum is said to be seriously considering a race, and New York Times columnist Nicholas Kristof has acknowledged he’s exploring a run. Kristof said in an email last week that he is “getting close to a decision.”