Oregon lawmakers to hear from public on redrawing congressional districts

PORTLAND, Ore. — Oregon is set to get an additional congressional seat, but right now, we don’t know where that new district will be. The legislature has to make a decision by the end of the month. KATU News spoke with Representatives Andrea Salinas (D) of Lake Oswego and Shelly Boshart Davis (R) of Albany on Saturday about how this will impact Oregonians.

“It’s impossible to give Republicans what they want because we’d have district snake through the entire state and cherry-pick a few Republican voters from our most densely populated centers,” said Rep. Salinas. “And in case I haven’t said it, we are expressly prohibited from redistricting based on party affiliation.” 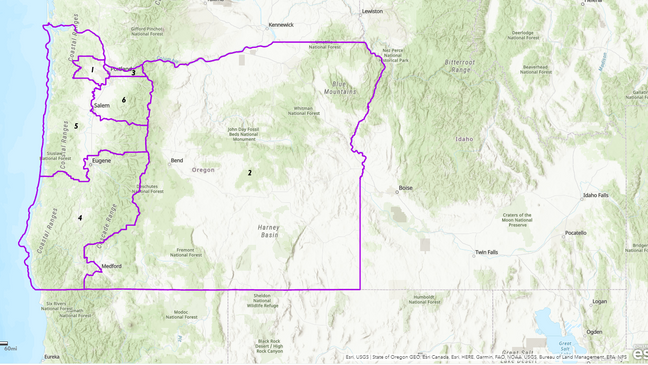 The proposal from House Republicans keeps Douglas County as part of the 4th District and adds portions of southwest Oregon to the district but removes Benton County and does not add Lincoln County. (Oregon Legislature)

“This is the one that I call the ‘All Roads Lead to Portland’ map,” said Rep. Boshart Davis. “There are four of our six congressional districts that touch the Portland metro area. So, people need to be involved. If you’re a farmer in Jefferson County, you may be wondering why they chose for you to be represented by someone in Portland.”

The state legislature will make the final decision by September 27. They will be taking public comments during a virtual listening tour next week (Sep. 8 – 13).