Oregonians won’t get a refund on $300 million in personal income taxes generated by federal stimulus payments, as the Legislature is set to conclude its 2021 regular session on Friday or early Saturday without addressing the issue. 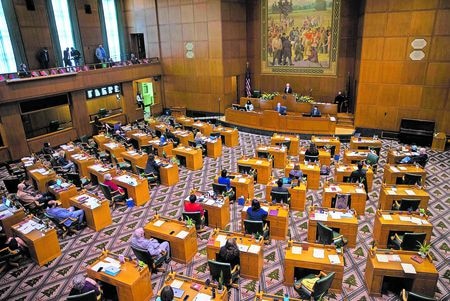 Early in the session, both Democrats and Republicans had expressed support for resolving the thorny situation and returning the money to roughly 900,000 Oregon taxpayers. But the issue faded as the session continued.

“It had all the appearances of an easy, bipartisan bill. And even as time went on, as the state became more flush with dollars, I thought for sure now it’s not about keeping the money,” said Sen. Dick Anderson, R-Lincoln City, who introduced a bill early in the session to refund the tax money. “For heaven’s sake, we’ve got more than we need. I don’t know what else we could have done.”

On average, Oregonians who received stimulus payments owed an extra $333 in state taxes because of the federal money. The specific amounts varied considerably based on personal tax situations, but taxpayers across the income spectrum faced a hit.

It’s a complicated issue. The stimulus payments — $1,800 in two installments last year, and another $1,400 in March — came in the form of a federal tax rebate that isn’t subject to state taxes.

Oregon, though, is one of six states that allow taxpayers to deduct a share of their federal tax bill from their state tax obligations.

That’s a tax break most of the time. But because the stimulus payments were a tax rebate, that meant Oregonians had less to deduct from their federal taxes — and therefore a higher state tax bill.

Lawmakers acknowledged Congress intended all the stimulus money go directly to the recipients, without a tax hit. In February, U.S. Rep. Peter DeFazio, D-Springfield, wrote to the Legislature’s Democratic leadership urging them to refund the tax money.

“This indirect tax will disproportionately impact individuals earning between $20,000 and $70,000 and families earning between $50,000 and $100,000 annually,” DeFazio wrote. “It is unconscionable to ask those working families who have struggled the most during this crisis to bear the weight of the state’s budget shortfall.”

As it worked out, the state didn’t have a budget shortfall after all. Revenues continued climbing during the pandemic, thanks to federal support and a recession that was much shorter and less severe than initially feared.

But lawmakers were juggling a number of conflicting priorities during the Legislature’s final days this month, and the taxes generated by the stimulus never rose to the top of their priority list.

As recently as last month, leading Democrats indicated they were committed to addressing the tax hit this session. But the Legislature’s majority party never moved forward with any legislation; Rep. Nancy Nathanson, D-Eugene, and Sen. Ginny Burdick, D-Portland, who chair the revenue committees in the House and Senate, didn’t respond to requests for comment Friday.

On Thursday, Anderson moved to have his tax bill pulled from committee and considered by the full Senate. But his proposal was quickly rejected.

Posted at OregonLive by Mike Rogoway on 6-25-21