Oregon To Get 6th Seat In Congress

Following a decade of robust population growth, Oregon will receive a new congressional seat for the first time in 40 years, the U.S. 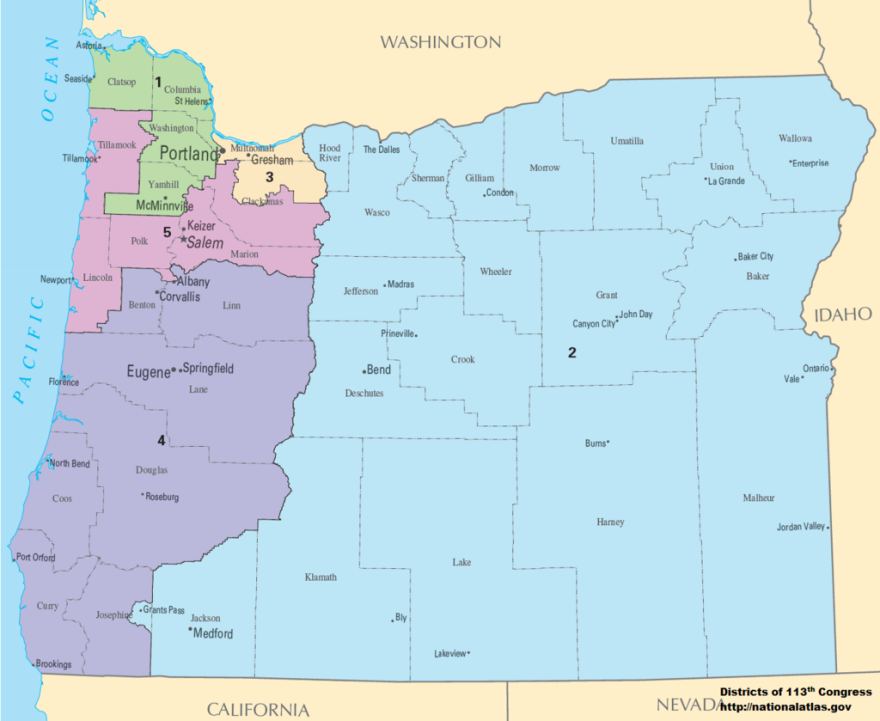 According to the 2020 census, the state’s resident population was 4,237,256 as of April 1, 2020. That’s a 10.6% increase over the 3,831,074 that officials calculated a decade before. The population figures used to determine representation are slightly larger, including both people living in Oregon and some federal employees overseas who normally reside in the state.

The increase, weighed against the slower growth or even population declines in other states, means Oregon now gets a marginally greater slice of the congressional pie: six members of the U.S. House of Representatives rather than the current five. Under the reapportionment process, the country’s 435 congressional seats are rejiggered every 10 years to account for population trends.

Other states gaining seats this year include Texas, which will receive two, and Colorado, North Carolina, Florida and Montana, which are gaining one. California, Illinois, Michigan, New York, Ohio, Pennsylvania and West Virginia lost seats. New York fell just 89 residents short of maintaining all of its 27 seats, the Census Bureau said.

A new spot in Congress had long been predicted in Oregon, which narrowly missed out on a sixth seat after the 2010 census. Now that it’s official, lawmakers face the likely contentious process of splitting the state into six districts.

What that map will look like is anyone’s guess. Currently, four of the state’s five U.S. House members are Democrats. Some observers have suggested it’s likely a new seat will lean Republican, but exact boundaries are far from certain and it can be tough to predict how any new set of boundaries will shake out in the long term.

The dynamics that will go into shaping those maps have also changed significantly in recent weeks.

With sweeping control of state government, Democrats had been poised to dominate redrawing not only congressional maps, but boundaries for the state’s 90 legislative districts that will last for the next decade.

But in order to stop Republicans from using delay tactics to slow bills, House Speaker Tina Kotek, D-Portland, has agreed to give the GOP an equal say on a House committee tasked with redrawing maps. Senate President Peter Courtney, D-Salem, is expected to do the same for the Senate Redistricting Committee, though he has refused to confirm or deny that.

Even parity in one chamber, however, gives Republicans what amounts to veto power. If lawmakers are split along party lines over new maps in committee, those maps can’t pass out for a full vote. Such a deadlock would ensure lawmakers are unable to pass their own plan by a late September deadline.

“Now that we have equal representation on the redistricting committee, our legislative and congressional districts will be drawn in a way that avoids political gerrymandering,” House Minority Leader Christine Drazan, R-Canby, said in a statement Monday. “Our current maps have favored one political party over another for the past 20 years, but Oregonians can be confident that this sixth congressional district will be drawn according to the rules to give people fair representation.”

In 2011, when Oregon last redrew political maps, Republicans and Democrats were at a point of near parity — evenly split in the House and nearly so in the Senate. That balance resulted in a bipartisan agreement that was not challenged in court.

“Our state’s growth and changing demographics require a careful redistricting process that includes the voices, needs, and stories of all Oregonians, including those who’ve traditionally been shut out of the political process,” Salinas said.

If lawmakers fail to find agreement, responsibility for drawing new state House and Senate boundaries would fall to Secretary of State Shemia Fagan, a liberal Democrat. But a new congressional map would become the purview of a panel of judges, in a process that has never been tested.

The possibility that judges will ultimately control congressional boundaries has led some national observers to conclude that Oregon’s maps could turn out far different than if Democrats had maintained full control.

Monday’s announcement marks the first time Oregon has received a new congressional seat since the 1980 census. Along with the new seat, the state will also receive another electoral college vote, bringing the state to eight reliably Democratic votes in presidential elections.

The official population data issued Monday also has a role in determining the size of state House and Senate seats. Each Senate district drawn up this year will need to include roughly 141,242 people, with consideration also taken into preserving communities of interest and other factors. Each House district will need to include roughly 70,621 people.

Since growth in the state has occurred unequally, meaningful changes are likely in both House and Senate maps. Oregon’s growth in the last decade has centered primarily on the Portland metro area — especially Washington County — along with Bend, meaning more electoral power is likely to be centered in those areas. At the same time, portions of Eastern and Southern Oregon have seen slower population growth than the state as a whole, meaning they will have less representation.