A recall effort against Sen. Lynn Findley, R-Vale, has been officially approved to begin circulating petitions, the Secretary of State said Thursday. 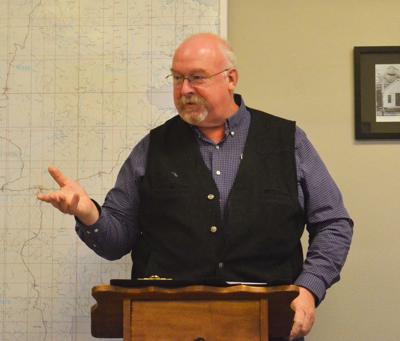 The Findley recall was approved to circulate petitions on July 7.

“Each petition signer must be an active registered voter in Senate District 30 at the time of signing the petition,” said Carla Axtman, communications director for Secretary of State Shemia Fagan (D).

Findley’s Senate District 30 is the largest in the Senate, covering all of Baker, Grant, Harney, Jefferson, Malheur and Wheeler counties and parts of Deschutes, Lake and Wasco counties.

The Secretary of State’s website shows that a “Findley Failed” political action committee was created on July 1.

As of Friday — 15 days since it was created — the committee showed no financial contributions or spending.

Findley was among six Republican senators who have been sharply criticized by some conservative activists for voting against Senate Bill 554, a gun control bill, rather than walking out to prevent the legislation from moving forward.

The final version of SB 554 barred concealed weapons from the state Capitol and the passenger terminal at Portland International Airport. An amendment by the House added new rules for gun storage and locks in homes.

Sen. Bill Hansell, R-Athena, told the East Oregonian newspaper that prior to the vote, the Republican caucus had been lobbied by the Oregon Firearms Federation, which advertises itself as the state’s “no compromise” gun rights group, to walk out on the session. A Republican walkout would have prevented a quorum in the Senate, stopping all legislation.

The decision of whether or not Republicans should walk out over the gun bill split the caucus.

Sen. Fred Girod, R-Stayton, said he would go to the Senate floor to argue against the bill and vote, even though it would mean a quorum would be present and the bill would likely pass with Democrats in support.

Republicans should not bring the session to a halt with more than three months to go and crucial legislation still pending, Girod argued. He also expressed concern that Republican single interest groups were beginning to expect a walkout against bills they opposed.

In the end, six Republican senators — Girod, Findley, Bill Hansell of Athena, Tim Knopp of Bend, Bill Kennemer of Canby and Dick Anderson of Lincoln City — went to the floor to vote against the bill.

But the move was far from unanimous. Republican senators who chose to be absent without Senate permission included:

• Dallas Heard of Roseburg, who is also the chair of the Oregon Republican Party.

• Dennis Linthicum of Klamath Falls, who is also the treasurer of the Oregon Republican Party.

• Kim Thatcher of Keizer, who was also the unsuccessful GOP nominee for Secretary of State in 2020.

• Art Robinson of Cave Junction, a freshman, who would eventually leave the Republican caucus to join Sen. Brian Boquist of Dallas as senators elected as Republicans but announcing later they were independent.

Other senators received permission in advance to be excused, removing them from the center of the quorum issue.

Though Findley and the other GOP lawmakers spoke out forcefully against the bill, their presence in the chamber allowed for a quorum of senators to do business.

SB 554 passed 16-7, with Sen. Betsy Johnson, D-Scappoose also opposing the bill. It was sent to the House, where House Minority Leader Christine Drazan, R-Canby, announced ahead of time that there would not be a walkout. The bill, with some Democratic amendments, passed 34-24.

Gov. Kate Brown, D, signed the bill, which will go into effect on Sept. 27. Backers of a proposed referendum to overturn the bill must submit 74,680 valid signatures to the Secretary of State by Sept. 24. The law would then be put on hold until voters could decide the issue in the November 2022 general election.

After refusing to walk out, there were angry denouncements of the Republicans who went to the floor instead of walking out.

The Senate Republican Caucus also reported death threats against some of the GOP senators to the Oregon State Police for investigation. No action has been publicly announced on the threats.

A recall was filed against Girod, but the July 6 deadline to file petitions passed with no documents submitted. That action is now dead.

The Findley recall is in an earlier phase, with the circulation of petitions approved on July 7, the day after the demise of the Girod recall drive.

Kopke-Hales wrote in his June 14 comments on the petition that Findley’s failure to walk out was “against the values and principles of the constituents he represents.”

Findley told the Blue Mountain Eagle in June that going to the floor of the Senate was doing the job voters sent him to Salem to do: represent constituents’ positions and values through the legislative process.

“I chose to stand and fight and put stuff on the record,” he said, “and by staying in the session, I was able to work hard for the constituents. And that’s what I’m supposed to do.”

The petition also criticized Findley for co-authoring Senate Bill 865 with Hansell, which would have barred senators from simultaneously holding public office and being an officer in a major political party.

The bill was seen as a slam on Heard and Linthicum for walking out. But Hansell and Findley said its purpose was to assure that actions and votes by lawmakers in the Senate not be confused with officially sanctioned state party positions.

The bill was put on hold and did not receive any additional action before the end of the session in June.

Heard and Linthicum have said the walkout was a personal decision as a senator representing their districts’ constituents, not a state party stance.

Findley was justice of the peace and later mayor of Vale. In 2018, he was appointed to represent House District 60, replacing Rep. Cliff Bentz, R-Ontario, who was appointed to the seat of retiring Senate Minority Leader Ted Ferrioli, R-John Day.

Findley won the seat in the November 2018 general election.

Findley was appointed to the Senate in early 2020 after Bentz stepped down to make an ultimately successful bid to replace retiring U.S. Rep. Greg Walden, R-Hood River.

Posted at the Blue Mountain EAGLE by Gary A. Warner Oregon Capital Bureau, 7-16-21